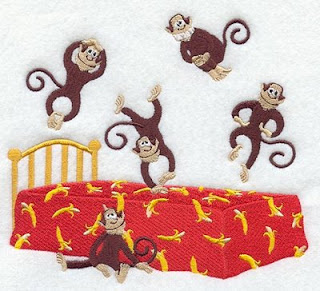 Have you ever had one of those nights where after they are finally asleep you want to wake them up and give them a cuddle and try again? I did tonight.
The first time I said goodnight it was quite sweet. Then they asked for a cuddle...no problem....still sweet mommy. Then E fell asleep and A wanted him out of his bed so I moved E to his bed(the upper bunk) he woke up. Then the negotiations began to get E back in A's bed because he doesn't like to sleep alone. By this point the sparkle has left my eye and I'm getting a little cranky.
Then they are back in bed together and now they are goofing around. "Oh, how cute", I think since it's the first time they haven't been fighting all day. After 10 minutes of escalating hysteria it's no longer cute. It's now after 9p.m. and I'm reduced to my tried and true, "Seriously......go to sleep".
Several dozen repetitions later and I have now separated them and threatened them and have hope that they are maybe falling asleep. And then......I hear whispers.....and movements. Like a charging rhino I stomp down the hall and say...."That is enough....get your butts in bed and go to sleep". At which point my darling A looks at me with eyes filled with tears and says, "But I was just passing E a pillow he forgot".
Now they're asleep and I feel like the meanest mommy in the world. Oh well......hopefully I'll do a better job tomorrow night.
No matter how they day has been, the minute they fall asleep this is how I see them. 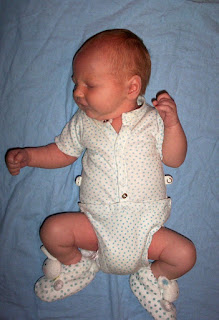 - May 26, 2008
Email ThisBlogThis!Share to TwitterShare to FacebookShare to Pinterest

Oh my goodness, I just saw two angels and we have all been blessed to be the chosen family that they were placed in.

Our precious Eric and Adam are a gift from God.