The best games are the ones we make up ourselves. The kids had friends over on Thursday. 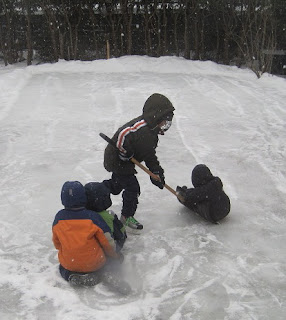 And while E was the only one who wanted to skate they all wanted to play on the rink. So they made up a skating/shuffleboard game using shovels and their own bodies. 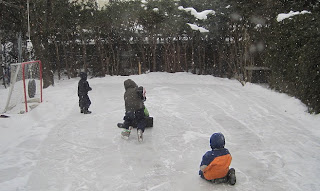 Later that evening they were out in the yard with some other friends and I could see the game had changed again. The rules of this game were not clear to me. Perhaps like long jump in that distance traveled was the goal.....but sliding like penguins on the ice. 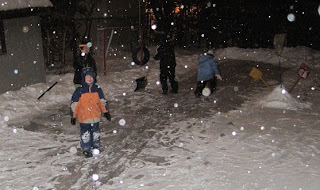 - January 14, 2012
Email ThisBlogThis!Share to TwitterShare to FacebookShare to Pinterest

That rink provides wonderful playtime for the boys and their friends. They look like they are having a blast...

sure brings back memories of gthe Oakville rink for they guys....Love dad

Your backyard rink has created tons of outside fun for the boys and all their friends.
It is so nice to enjoy the ice in your "OWN" backyard.