E and I(M) went out on his first Cbaree. It was great. He has only had two evening sessions before this first camp session. Still being a "tendrpaw" but wanting to go, and a little nervous about the concept, he asked that I go too. I'm glad he did because it was a lot of fun for kids and adults. It was really cool to see the kids learn key skills. At the camp they learned how to build a personal fire (which each cub had the opportunity to do four times over the weekend), build an emergency shelter (they each built one during their lesson), use a compass to take a bearing and conduct introductory orienteering, and trialcraft (using the environment to signal to others your route). The cubs were also responsible for their own meal on Sat night. E and his friend made chili, noodles, caesr salad and raw veggies. It was excellent. E really had a good time and can't wait to go out again in Novmber.

Here is our campsite and E and his buddy cooking supper. 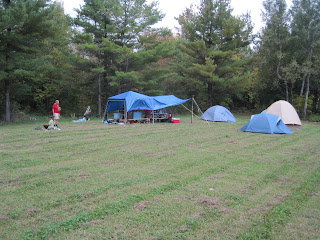 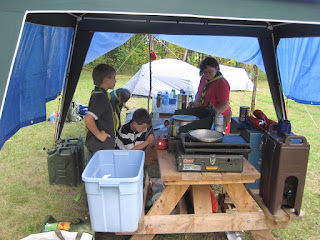 The cooks ate last, but still ate a hearty meal. Another cub learning how to make coffee for a Scoutt leader. 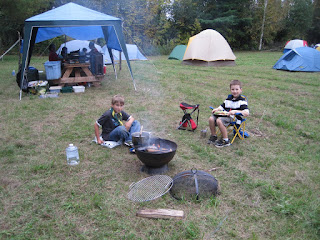 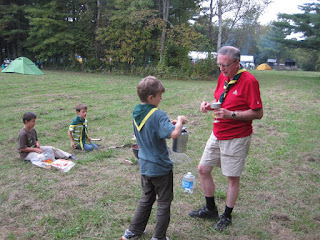 After supper the boys took some time to relax by the fire before the "grand campfire" later that night. 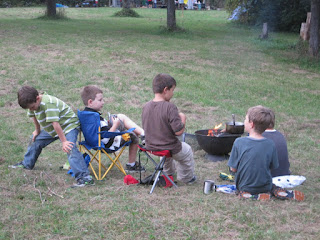 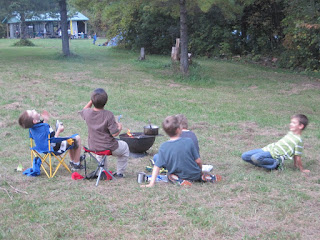 On Sun morning E got sidetracked on his way to get some firewood. 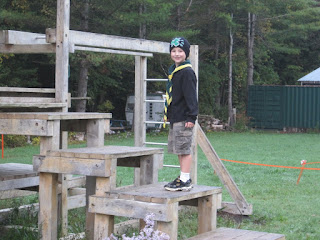 On the last day, the boys had to prove they had learned their skills and had a challenge where they had to do a 2hr hike and apply all of their skills correctly. Here is E and his friend using a "hobo stve" at the end of the adventure. Since they knew how to light a fire, they were given a kit and had to light the fire, heat water and make their own ht cholclate. Objective complete. They all did very well. Here is the entire troop. It is a small troop of only 6 kids (One couldn't make the trip). 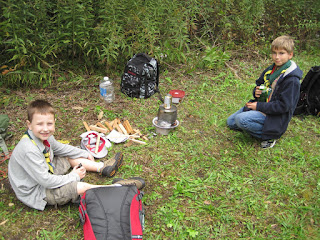 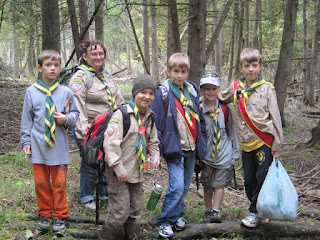 Again, a very fun weekend for all.
- September 25, 2011
Email ThisBlogThis!Share to TwitterShare to FacebookShare to Pinterest

Boy does that ever bring back memories......It was pretty hot when Mj and I went, so hot that some of the parents had to sit in the cars with the ac running....not us though, we toughed it out, slept on the ground, ate beans, and well it was just a great time.....Love you all...Grampy Peter

at the risk of sounding super terrific, that does look like a cool weekend.
E

Makes me want to be a Cub again!