So here's how it started. Yesterday A was wearing this shirt and it reminded me of the old StarTrek show, the really old show. I started telling the kids about it and we decided to watch an episode. An episode that aired Sept. 8, 1966 called TheManTrap. 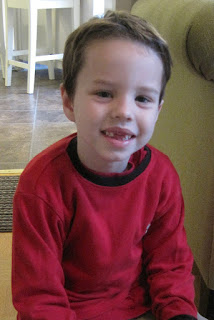 And they liked it. That is until the alien shifted back to it's natural form. I figured since it was so ridiculously cheesy that it wouldn't really be scary. I was wrong. 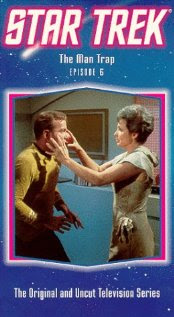 They are completely traumatized. We had to escort them upstairs to brush their teeth and stay up there while they went to bed.
E said he shouldn't be scared that I, daddy and A might be shape shifting aliens seeing as how he had known us his whole life-and it was the last alien of it's species so there couldn't be anymore still around-but he couldn't help it. 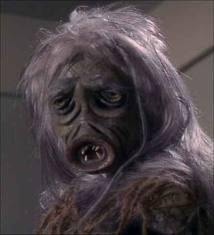 As of this a.m. they are still escorting each other around the house-just in case-safety in numbers you know.
- November 25, 2011
Email ThisBlogThis!Share to TwitterShare to FacebookShare to Pinterest

That is both hilarious and too bad. I hate old star trek, it love TNG. I am wondering where I can find it to watch with Jeremy, any suggestions.

Even to this old Trekkie, that is a very scary alien! Except for the hair of course, that looks a lot like mine this morning.
Live long, and prosper.-- Spock