E had a hockey game today. 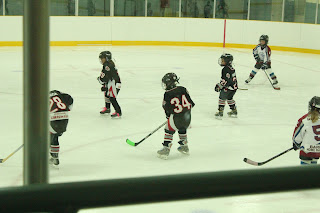 And he is definitely getting better. His skills are improving every practice. 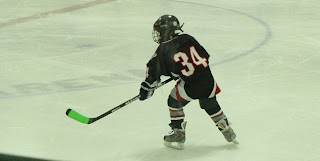 But there was drama on the ice today. He got a penalty!! And for those of you who are not familiar with this level of hockey, there are almost NEVER penalties given out. The kids are still learning the skills and so much happens on the ice that is accidental. Which is basically what happened today.
E put his stick between an opponents legs to get the puck. Then someone from E's team came skating up and couldn't stop so she crashed into the same opponent. That person lost their balance and fell backward over his stick. The whistle blew - tripping penalty. Nobody in the stands could believe it....it's the first penalty of the year. (The coach thought at first it was the other person who got the penalty for crashing/checking the other player.)
E is taking it all in stride but he does not think very highly of that referee (who I think was about 14 years old). 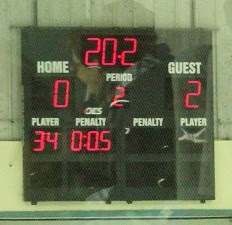 It was lonely in the penalty box. 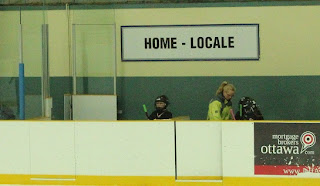 But after 2 long minutes, his game went on. 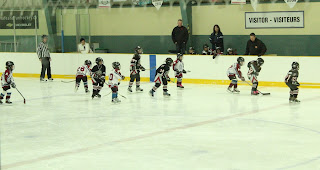 - November 05, 2011
Email ThisBlogThis!Share to TwitterShare to FacebookShare to Pinterest

Loved the blog this morning.... great photo journaling.
Cracks me up to think the ref seen a penalty. The kids look like bowling pins out there, someone is always down.
Way to be in the play E..... I guess you can’t get a penalty if you are nowhere near the puck or opposition players.
(the green stick rocks!)
Granny

Go Eric go....love this! You are so much like your dad it is crazy.

Love to all
nana