While E was at choir yesterday A and I went to pick up a few groceries.
We took that opportunity for him to practice checking out. He did the whole process on his own.
And my thanks to the cashier who was very patient and helpful. 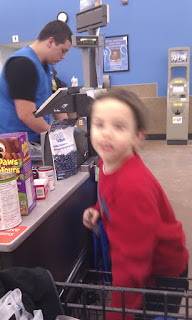 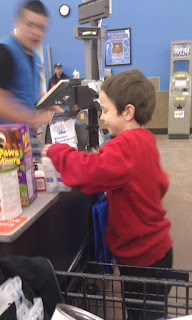 Our church has planned a fast for this week. We are not going to be giving up food but we will be fasting electronics.
Now....not all electronics obviously.....I need to blog!
And I need to keep my phone on so I can receive texts.
But other than that.....no electronics.
No wii, no tablet, no netflix on laptop, no email. 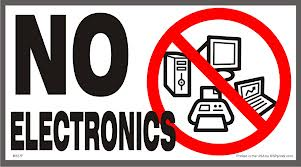 Every second week the kids will be completing an 11-sentence composition.
Last week was narrative (see below). This week is opinion.
A-Narrative

Gp Escape
Once upon a time there were 2 Guinea pigs that lived in a house with 2 birds, a dog and a cat.

The Gps were happy but they wanted adventure. So they escaped they went upstairs and ran into the cat! The Cat chased the Gps. Finally the cat gave up. The Gps went down stairs.

They went in the basement and bumped in to the dog! The dog hit one Gp! But he survived. The Gps hid under the chair. They escaped and ran to the middle floor.

They took a big breath and headed for the cage. But the birds attacked! The birds pecked the Gps. The Gps bit the birds toes! The birds flew away.

At last the Gps can go in their cage.

Once upon a time there was a LEGO king who lived in a huge LEGO castle.

In the castle there lived a wizard, three dwarfs, the prince, three crossbow men, an archer, a horseman and a giant troll named hogose.The king was a very good king. The reason a giant troll is on the good team was because one day when the small trolls were picking on him and hi riddles King bob came and took him in.

One day the trolls attacked and got one of the wizard’s summoning scrolls. Not any scroll, it was the skeleton scroll! Well what kind of troll would you be if you didn’t say it out loud?! And of course it summoned all of the EVIL skeletons and the trolls and skeletons started terrorizing villages!

So the King did not like this news so he sent protection to the villages. And the villages were not getting terrorized but they just kept coming. So the King gathered up all his army and attacked the evil castle. Many men died that day but many were remembered.