One Month and My Second Wind

You know how when you are doing something difficult you pace yourself? Well that's what I had been doing while M was away.
Three more drive-kids-to-conflicting-appointments and he'll be home.
Two more taking-out-the-garbage days and he'll be home.
One more Cub/Beaver event and he'll be home.
And now he's home but he's out of commission. And I didn't pace myself for that!! So I need to regroup and find my second wind.

*****Veggie Update*****﻿
﻿
It has been one month since this family jumped on the vegetarian band wagon.
So far so good....if you don't count that cheeseburger melt down I had yesterday.
The kids favourites are pizza, black bean quesedillas and veggie noodle soup.
Not surprising since those were pretty much their faves back when I cooked them with chicken! 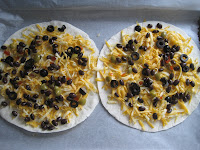 It has meant that I have had to rethink my shopping lists and go-to menu items.
However, I also have been introduced to products I was completely unaware of previously.﻿
Vegetarians can't eat meat pie? Pshaw...veggie ground and sauteed leeks.
﻿ 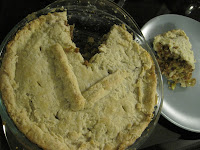 I tried something new this evening. I used a product called TVP that I found at BulkBarn. Essentially it's a dehydrated protein source. It can be reconstituted and added to pretty much anything..taking on the taste of whatever seasonings you use. It is cheaper than veggie ground and easier to keep on hand.
I added it tonight to the fried rice I made (leftover rice, carrots, peas, leeks, egg, tvp and soya sauce). I served veggie spring rolls with it...yummy!
The most interesting aspect of this change in diet so far has been that the kids are willing to eat pretty much anything I make. Maybe because they figure that's the consequence of omitting meat? Maybe their tastebuds are maturing? Maybe the flavors are more inticing?
I really don't know why.....but I like it...a LOT.
- February 03, 2013
Email ThisBlogThis!Share to TwitterShare to FacebookShare to Pinterest